To Inuit, Hebron is one of the most culturally important locations in all of Labrador. Inuit share a feeling of profound reverence to the place that was once home to many.


The Hebron Mission Station was established by Moravian missionaries in the 1830s. The station provided religious instruction to the local Inuit, and was also an educational, commercial, and medical center. Many Inuit were also drawn to the area for special events, such as Christmas and Easter


The architecture used to build the Hebron Station is particularly representative of the Moravian architectural design style — a Germanic flavor with a steep, elongated roof, punctuated by small dormer windows. Hebron is located above the tree line, so the Mission House would have stood out quite prominently from the surrounding landscape. The Hebron Station officially closed in 1959.


The Hebron Station is identified as one of the most historically significant mission-built structures still standing in the province of Newfoundland and Labrador. The Nunatsiavut Government is actively working to restore the buildings at Hebron so as to preserve them for future generations.


Visitors are welcomed in Hebron during the summer months by Inuit ambassadors and will have the opportunity to witness the restoration process underway.


To read an excellent overview about the Moravian presence in Labrador, click here 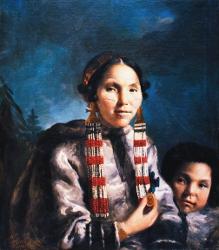 The influence of the Inuit woman, Mikak, on the lives of our communities today is immense.
The story begins in the mid to late 18th century on the Labrador coast. British fishing crews and stations had taken hold of all the good harbours and coves throughout central and southern Labrador. Merchant stations along this entire stretch were operating all year long. This was a time of colonial impact in Labrador.


Inuit were dispersed throughout the north, central, and south of Labrador. Gravitating towards the European camps to access new goods and tools, the Inuit were considered a hazard because of a long history of pilfering equipment and boats and skirmishing with the British workers. Tensions were high.


One (of many) altercations between a fishing station and an Inuit group led to a small group of Inuit being captured by the British. Among the Inuit was a woman named Mikak, and her son Tutauc. During her 'stay' under British supervision, Mikak befriended the commanding officers and began to learn English. She also taught some Inuktitut to those interested in learning.


The Governor of Newfoundland at the time, Governor Hugh Palliser, recognized Mikak's efforts as an asset to bring the British and Inuit closer together. Governor Palliser was most interested in improving trade relations and limiting the hostile skirmishing between the Inuit and the British. Governor Palliser was so impressed by Mikak that he sent her to England to meet with English society.


Mikak impressed the English society tremendously during her time in England. She was seen as a charismatic, intelligent, and caring woman. Her ability to speak English led to many excellent connections with the high society of England. Not many Inuit had ever travelled to England before, let alone charm and befriend the aristocracy.


While in England, Mikak met with many people, including a Moravian missionary, Jens Haven, that she had previously met while still in Labrador. Jens Haven was trying to organize a missionizing effort to British ruled Labrador, and was petitioning the British government to approve. Jens saw Mikak as a tremendous resource to his cause, and visited her often while she was in England. Mikak was receptive to the Moravian cause and advocated for their mission in Labrador among her new aristocratic friends.


In the late 1760s, the British government granted permission for the Moravian mission to Labrador, thanks in large part to Mikak's efforts. Mikak and son Tutauc sailed back to Labrador, and Mikak took on the role of telling her people of the Moravians and their intentions. Mikak was quite possibly the first Inuit ever to return from Europe to Labrador at that time.


Mikak's influence on the Inuit of Labrador was immense. The Moravians went on to establish multiple mission stations throughout what is now Nunatsiavut, each having a profound impact on the culture and heritage of the region.


Mikak exemplified an Inuit self-determination and political and economic awareness at a time of massive transition for the Inuit, which continues to be felt throughout Nunatsiavut. 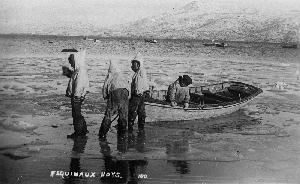 Okak National Historic site is a grouping of over 60 archaeological sites representing a long record of habitation in the surroundings of Okak Bay. One of these sites is the Okak Mission Station.


Okak was the location of the Moravian missionaries' second mission station in Labrador. Establishing a church in 1776 in the Okak area (well north of Nain), the Moravians intended to expand their missionary work to Inuit communities north of Nain. Okak had always been an important area for the Labrador Inuit and ancestors.


In 1918, the Moravian mission re-supply ship the Harmony came to the Okak Mission Station on its bi-annual run. When it arrived in the harbour, all the residents of Okak got very excited. It would have been at least six months since they had last had new supplies, and everyone wanted to welcome the ship after its voyage. Residents rushed on to the ship to greet the crew.


What was not known until days later was that the crew of the Harmony were infected with Spanish Influenza. Days after the ship arrived, people in Okak began to die of disease. The epidemic was so bad that the majority of the population of Okak died from exposure to the disease.


The mission station and community were abandoned soon after in 1919 as the population was decimated by the Spanish Influenza.


While the story of Okak is very tragic, there remains very good archaeological evidence of life before and during the Moravians in the area. Tent rings and early stone tools used by the earliest inhabitants of the area are documented, and artifacts and architecture from the Moravian Mission are clear to see. 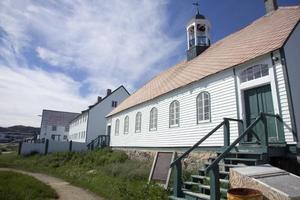 The Hopedale Mission Complex was the third mission established by the Moravian missionaries on the Labrador Coast. Founded in 1782, the mission was established at a seasonal Inuit encampment called Arvertok, which translates in English to "the place of whales". The Moravians named their post Hoffental, in commemoration of their first missionizing attempts in Labrador in 1752 that ended in the deaths of the missionaries. Hoffental translates to "Hopedale" from German, which remains today the name for one of the communities of Nunatsiavut.


The Hopedale Mission Complex represented one of the biggest centres for Moravian missionizing during their expansions along the Labrador Coastline in the 18th-20th centuries. Many structures were added to the Complex, including the mission house, the church, a connecting link between the church and mission house, a reserve storehouse, the dead house, and the oil and salt storehouse (no longer standing). The detached mission building, built in the 18th century, is the earliest surviving Moravian structure on the Labrador Coast.


As the Hopedale Mission Complex grew, much of the local Inuit population in the area became involved with the church. Along with new spiritual teachings, the Moravians also brought with them access to European goods for trade, education, schools, food, clothing, rifles, and able-bodied employment.


While it took some time for the Moravian Christian ideals to take hold with the Inuit, eventually a middle ground was found, mixing Inuit traditions with the Moravian teachings. The Moravians brought forth many significant changes to the Inuit way of life, including the abandonment of a nomadic lifestyle (through settlement in the newly formed Hopedale), formal education, and the development of a written language for the Inuit. The Moravians also brought European music to Hopedale, teaching Inuit to play Haydn and Bach on brass instruments (a tradition that continues today). The translation of religious and musical text into Inuktitut was a priority for the Moravian missionaries.


If you are interested in learning more about the Inuit learning to play Haydn and Bach on brass instruments, please click here. 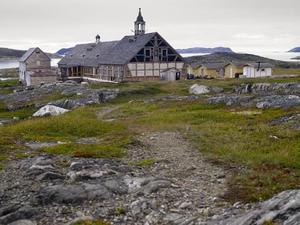 The Hebron Mission Station was established by Moravian missionaries in the 1830's. The station was part of the expansion and religious missionizing by the Moravians of the Inuit in northern Labrador. The station provided religious instruction to the local Inuit, and was also an educational, commercial, and medical center. Many Inuit were also drawn to the area for special events, such as Christmas and Easter.


The architecture used to build the Hebron Station is particularly representative of the Moravian architectural design style — a Germanic flavor with a steep, elongated roof, punctuated by small dormer windows. Hebron is located above the tree line, so the Mission house would have stood out quite prominently from the surrounding landscape.


The Hebron Station officially closed in 1959, when the provincial government and the Moravian mission determined that supplying a remote location such as Hebron was not economical. The government store was shut down, which led to a mass relocation of Hebron residents to communities further south in Nunatsiavut. Much anguish and shock was felt by the residents of Hebron at this decision. The relocation is still considered a traumatic event for many that live in the various Nunatsiavut communities.


Today, the buildings at Hebron remain abandoned, with rhubarb continuing to grow where the Moravian gardens used to be. The Hebron Station is identified as one of the most historically significant mission-built structures still standing in the province of Newfoundland and Labrador.


The Nunatsiavut Government is actively working to restore the buildings at Hebron so as to preserve them for future generations.


» Moravian Missions and the Inuit in Labrador

The Moravians were German and Czech Protestant devotees that came to Labrador in the mid-18th century as part of their church's missionizing efforts throughout the world. The Moravian presence in Labrador represents a remarkably constructive integration of Moravian and Inuit life and culture.


The Moravian missionaries established missions in a number of Inuit communities between the 1770s and 1960s. The Moravians struggled to gain a foothold in Labrador at first, but soon gained the respect of the local Inuit. Of particular note, the missionaries built on their extensive Inuktitut language skills learned by working with the Inuit in Greenland to communicate their religious messages with the Inuit of Labrador.


Today, though many of the Moravian mission houses are abandoned or closed, a large portion of the population of Nunatsiavut continues to practice the religion. Moravian traditions and customs live on, with a distinct Labrador Inuit twist. The physical artifacts and records left by the missionaries represent an immense resource to the residents of Nunatsiavut.

Ramah Chert is a unique stone that has been highly prized and sought after since Aboriginal groups first began to inhabit Labrador. Created in unique chemical and tectonic conditions at the bottom of the ocean about 2 billion years ago, Ramah Chert, as it is today, is often described as ranging from light grey to black with frequent banding or mottling in colour, characteristically translucent with a smooth but sugary texture.


Although the stone was traded over long distances along the east coast, the only known source of Ramah Chert is from Ramah Bay in the Torngat Mountains National Park. With the arrival of the Maritime Archaic people some 7,000 years ago, Ramah Chert was clearly recognized as a unique, high quality stone, and was traded as far south as New England and into the Great Lakes region. As Pre-Dorset and Dorset groups began to arrive from the north about 4,000 years ago, and Late Pre-Contact Amerindian groups from the south 1,800 years ago, the desire for Ramah Chert grew, as the stone was worked, traded, used, and discarded in archaeological contexts all over the province.


Archaeologists continue to learn more about the movements and relationships between previous cultures based on fluctuations in use and access to Ramah Chert. Today, Ramah Bay is recognized as a site of national historic significance, as it symbolizes a series of Aboriginal cultural traditions in the northeast and illustrates the kinds of creative technology and long-distance trade networks that early inhabitants of Labrador used in everyday life. 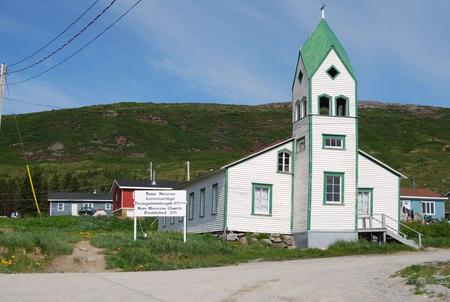